The team-up of modern stereolithography technology and materials can produce some truly stunning results. This case study features a detailed architectural model built by one of RP America's customers, Applied Rapid Technologies, using a UnionTech RSPro 600 SL 3D printer with Somos® EvoLVe 128 material. This is possible thanks to UnionTech's open source philosophy, which allows customers to choose whichever material they prefer.

Article originally produced by DSM. Learn more at their website.

Visitors to the Old Post Office Pavilion, one of the most iconic sites in Washington D.C., now have an enhanced experience from a scaled model of the building. Artist Clarence Schumaker and 3D printing specialists from Applied Rapid Technologies created the model using Somos® stereolithography material, allowing visitors to the site to experience the fine architecture details of the building up close. 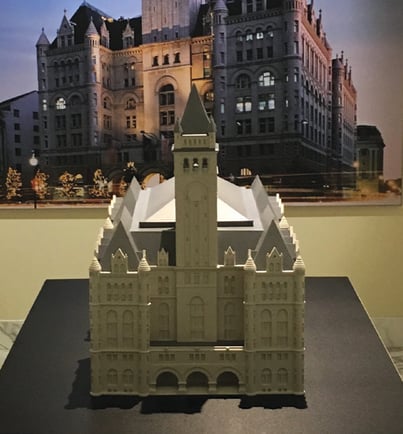 The United States government is incorporated with several agencies that serve different functions for its citizens. The General Services Administration is one of these agencies whose core mission is to help federal agencies buy smarter, provide efficient, cost saving technology, and create a bet-ter, faster federal government. GSA’s Public Buildings Service (PBS) acts as the federal government’s real estate arm and owns or leases office space in 9,600 buildings nationwide.

One building owned by GSA is the Old Post Office Pavilion. It was built in 1899 and was the city’s main postal office until 1914. Since then, it has functioned as an office building and retail site until 2016 when it was leased to Donald Trump and refurbished as the Trump International Hotel. The external architecture of the building has remained largely the same since 1899 and features seven story stone facades, a two-story chateau-like roof, lofty clock tower, and the highly decorative arches. The imposing clock tower is open to the public as a visitor center and is managed by the National Park Service. The clock tower is the second highest public space in D.C.

The Park Service is keen to offer the best experience to visitors of all of their properties, and want visitors with disabilities to have the same experience as non-disabled people. HealyKohler Design was brought on to design new exhibits and wayfinding for the experience. A 3D touchable model of the building was a component of the project. HealyKohler Design commissioned artist Clarence Schumaker from Daybreak Studios in Chesapeake Beach, Maryland to take on the project. Schumaker came in with experience of making a similar tactile model for the Washington Monument.

Schumaker was thrilled to be taking on this project. However, his biggest concern was to find a material that allows for the fine details of the building to be captured while being durable for public viewing. “Since the model was going to be touched and handled by the public, the biggest challenge was to find a way to represent the 1899 building and its highly ornate details in a durable, yet cost effective manner,” says Schumaker. “The small scale and capturing the intricate architectural features of the building meant usual methods, such as sculpting in epoxy clay, would not work. We also had a tight deadline to complete the project.”

After looking at several different build solutions, including CNC routing, Schumaker decided to use stereolithography
(SLA) to construct the model because the process was fast and SLA materials could offer strength and the fine features that were needed for the project.

Schumaker approached one of the first and leading SLA service bureaus in the U.S. Mid-Atlantic region, Applied Rapid Technologies (ART). Schumaker had worked with ART on previous projects such as a model of the Washington Monument. ART suggested using Somos® EvoLVe 128, a durable SLA material that produces accurate, high-detailed parts. It is almost indistinguishable from finished traditional thermoplastics, which makes it perfect for prototype testing and withstanding constant wear and tear. Schumaker says, “We all agreed Somos® EvoLVe 128 was the right material for the project.”

Schumaker and ART started off by designing and making a small 2x3-inch model with the Somos® EvoLVe 128. The Somos® material would be used to make the final model so they needed to test that it was strong enough and could replicate the architectural details of the building. ART had just installed a new UnionTech RSPro 600 SLA 3D printing machine at their facility with Somos® EvoLVe 128, which enables them to produce SLA parts quickly and with fine detail. 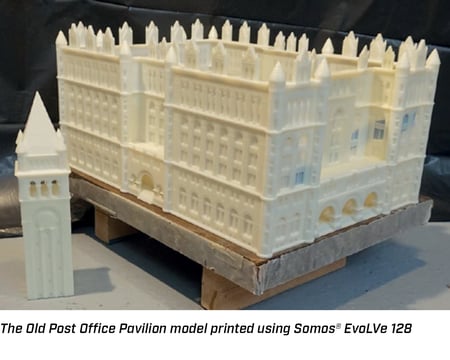 Bruce LeMaster, Applied Rapid Technologies President, says “One of the advantages of the stereolithography process for this project, and in particular the Somos® EvoLVe 128 and the UnionTech equipment, was speed and accuracy. We had only a three-week window to produce the model. Somos® EvoLVe 128 has good impact strength and flex so we didn’t worry about pieces breaking. The large-format capability of the UnionTech equipment, along with the Somos® EvoLVe 128, meant we could build complete sections, such as the roof in a single piece to minimize the number of cuts and parts.”

The added benefit of Somos® EvoLVe 128 is that it requires minimal cleaning and sanding, and accepts paint very well.

“Somos® EvoLVe 128 produces a very crisp, detailed part that really requires minimal clean up. It helped us minimize the amount of manual finishing after parts for the Old Post Office Pavilion model were built,” LeMaster said. “In fact, Somos® EvoLVe 128 is such a good, robust material that we use it as the final material for various low volume production parts because it is strong enough to hold up in production environments.”

The final product was a 18x12x18-inch model made up of 10 separate components which Schumaker fixed together around a plywood and epoxy clay support structure. This meant that the external Somos® EvoLVe 128 facades could be thin (in some places just 0.063 inches) to help reduce material costs, but still accurately reproduce fine architectural details. The Somos® EvoLVe 128 material was particularly effective for final painting. Schumaker painted the model with water-based automotive acrylic paint and a clear top coat.

The model of the Old Post Office Pavilion now resides in the Clock Tower of the Old Post Office Museum and is helping to improve the experience for visitors. As well as being able to view a model of the building they are standing in, visitors can also touch and feel the fine architectural detail that was originally designed and built back in 1899. It brings a brand new, hands on experience for visitors.

Want to learn more about how UnionTech equipment and Somos materials can be used to produce architectural models, as well as models, prototypes, and end-use parts for every other industry? Contact RP America. 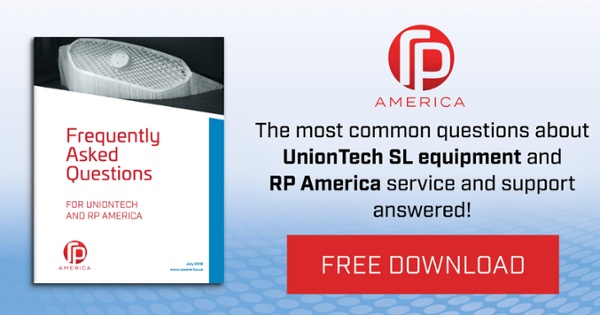