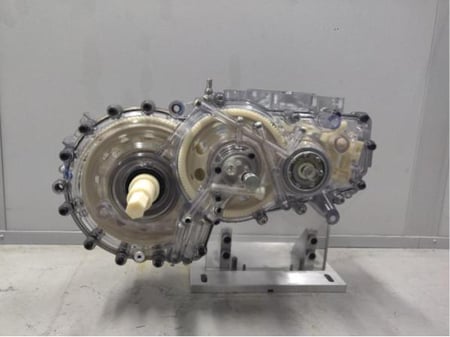 Linamar Corporation (Guelph, Ontario) is a global manufacturer of automotive parts that uses additive manufacturing (AM) to deliver solutions for their customers efficiently and cost-effectively. At McLaren Engineering, Linamar’s Product Engineering center in Livonia, Michigan, the team uses a fused deposition modeling (FDM) 3D printer as a workhorse for producing tooling, jigs, fixtures, models, and more. However, for lubrication flow analysis performed during the development process, FDM is unsuitable and a different AM method is required.

Historically, lubrication flow studies were performed by painstakingly cutting openings into prototype cast iron housings, which were then sealed with something like plexiglass and hot glue. The engineers could observe the fluid flow through the plexiglass to ensure it reached all required areas. If not, the interior geometry of the prototype housing had to be modified. Each iteration could take several months, controlled by the lead time for castings. Cutting viewing windows into cast iron is a laborious and tricky affair, and because the viewing windows had to be sealed in place, when problems were discovered in cast iron housings, a whole new cycle of prototype development would have to begin. This created lead times of greater than six months.

“It takes time and money to make castings, so we try to get it right the first time,” notes Jacob Ahlborn, eAxle Product Engineer. “Performing lubrication studies with plastic housings allows us to see the problem areas and make better adjustments based on observed issues. We adjust a dynamometer test rig to spin the gears inside, observing how different speeds and orientations change how the oil distributes throughout the gearbox. This allows us to simulate going up/down a hill, and driving around a corner. After an initial test, we typically remove material where needed with a Dremel tool, and epoxy in new ribs to correct the problem areas. Often times, we will go through five to ten iterations of this. From there, we will disassemble the gearbox, and take it to our designer desk where they can make the modifications to the raw castings and prepare the real parts to be made.”

This process has been revolutionized with the maturation and adoption of 3D printing. Within the last decade, stereolithography (SL or SLA) 3D printing equipment and transparent materials have developed to the point where clear housings for lubrication flow studies can be 3D printed directly with several benefits over the traditional methods. This technology allows Linamar to speed up the product development cycle significantly, which has huge implications for everyday business at the company as well as for innovative technology development, such as Linamar’s eAxle program (see below for the whole story).

For years, Linamar had been ordering clear housings from 3D printing service bureaus. As their need grew, the volume became large enough that Dr. David Saint John, Director of Innovation and Advanced Manufacturing at Linamar, began considering the advantages of bringing an SL 3D printer in-house. “It got to the point where it made financial sense to invest in a dedicated machine rather than ordering dozens of these housings externally,” said Dr. Saint John. “The already short lead time for printed parts can be further reduced by producing them in-house, largely by allowing the paperwork to follow rather than lead the execution of the printing. There are also more advanced possibilities, which are streamlined by having in-house capability, such as internal gauging and logo production using overburning.”

Overburning, also known as overcuring, is a method of marking parts made possible using SL technology. SL produces parts when a laser cures a liquid resin layer by layer. If an engineer wants to add a part number or logo to a part, they simply set the laser to repeatedly expose that area to the laser beam, essentially burning the shape or number into the part.

When Linamar made the decision to invest in their own SL machine, they turned to RP America, a 3D printer sales and support company in Iowa, which sells UnionTech stereolithography equipment. The UnionTech RSPro 600 SL printer that Linamar chose has a 23.6 x 23.6 x 19.7 inch build volume and is open source for materials. The machine was installed by RP America’s partner company RP Support in May 2018, and has been printing parts ever since. Linamar uses Somos® WaterClear 10122 material, which when finished simulates an acrylic appearance.  Both internal and external customers are impressed with the clarity which can be achieved with sufficient post-processing.

One dimension of this leadership is Linamar’s eAxle programs, which makes use of clear housings for lubrication studies to speed development. An eAxle is an electronic axle assembly that consists of an electric motor, an inverter, and a transmission.  Linamar works directly with OEMs as well as motor/inverter suppliers to develop eAxle transmission solutions for consumer and commercial markets.

“Our eAxle programs are a strong internal driver for development resources,” said Dr. Saint John. “Our customers request a variety of models and variants to support their own electric vehicle programs, and each of these models and variants requires lubrication flow studies to be performed.”  For the eAxle program, speed is key. Each transmission requires 5 - 10 iterations of clear housing testing during development. With traditional manufacturing methods, each iteration can take several weeks or months. With stereolithographic AM technology, Linamar can complete three iterations in two weeks or less.   It is this kind of responsiveness that allows McLaren Engineering to quickly design and test the next generation of electric mobility solutions.